SWISS GOLD TREUHAND AG uses the entire value chain on the gold market. From prospecting to raw gold purchasing and trading to the refinery in Switzerland, we are a competent partner for trading partners and our customers. Therefore, as a selected partner, you enjoy our unrivalled price-performance offers! Thanks to our long experience, we have direct access to very lucrative market niches that non-institutional buyers would otherwise find it difficult or impossible to use. It has fully paid off that we have invested in the entire value chain in the gold market over the decades. We have succeeded in gaining the full trust of all partners involved, thanks to our solid and reliable actions for years and our fair prices and partner models.

Today we are in direct contact with gold refineries and brokers around the world on a daily basis. With the special business partner structure of SWISS GOLD TREUHAND AG, we make it possible for you to fully exploit the dynamics of the gold markets, to generate the highest possible increase in value and at the same time, thanks to our broad diversification and constant monitoring, to eliminate your risk as far as possible Gold refineries and the raw gold purchasing offices, those partners who own the gold smelting and raw gold export decrees. Thanks to our support program, our business partners have succeeded in establishing a cost-effective raw gold trade between Africa and Europe. It is currently more sensible than ever to get into the gold business. Take advantage of the
opportunity. The convincing arguments are obvious: 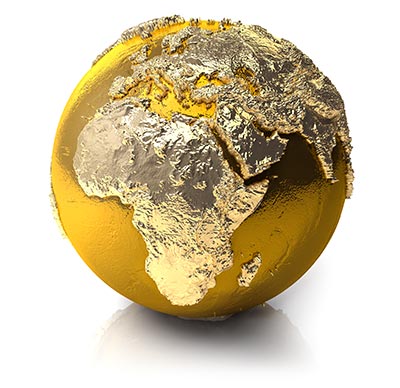 Natural products like oil, gold, diamonds etc. will be used more and more by the whole world population. Therefore the demand for these raw materials will increase significantly. This in turn will mean that gold will be based on the dollar and, due to increased purchasing power, e.g. in Asia, will lead to greater demand and higher purchases.

THE GOLD PRICE WILL RISE!

To what extent the predicted demand will cause the price of gold to rise can already be foreseen today. If a significant inflation trend develops, which is to be feared in the future due to an increased distribution of money by the central banks (money supply M3), increases in the price of gold between 50% and 150% over the next few years will be possible, even likely.

Africa is currently experiencing an above-average increase in demand from western countries. The main reasons for this are: Africa has huge natural resources of gold, diamonds, petroleum and other valuable raw materials. Africa is a dramatically growing economic area with an immeasurable need to catch up in all areas. Africa has a geographic location and a geopolitical position that is increasingly becoming the focus of interest for all of the world’s major industrial powers.

THE POTENTIAL OF CENTRAL AND WEST AFRICA

One of the African countries with the greatest growth potential is Central and West Africa, with which we work intensively. The unbelievably large reserves of natural resources of precious metals, diamonds and petroleum, the central location and above all the stable political situation make Central and West Africa one of the best positions for foreign investors.